The Fat of the Matter is... 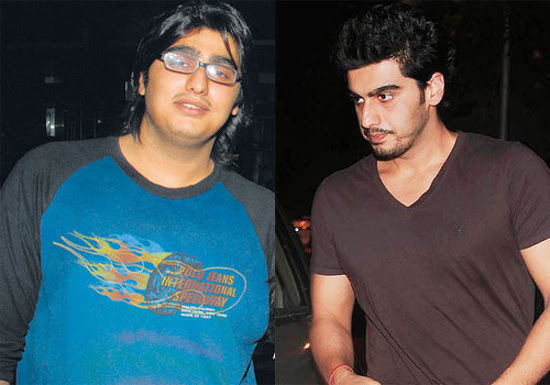 Now, isn't that inspiring? Before and after weight loss stills of Arjun Kapoor, Boney Kapoor's eldest son, who makes his Bollywood debut in Ishaqzaade. Challenging stuff, especially to go from a "khaatey-peetey-khaandaan-ka-ladka" to Bollywood star material. If reports are to be believed, Salman Khan is the driving factor behind this transformation as well. Which leads me to the question - Is Salman Bollywood's official trainer or what? He has been responsible for getting so many people off the fat truck, and right into 6-pack city. Almost like he stands behind them with a Kaleshnikov while they pound the lat machine. Well, as long as he isn't pointing his shooter at antlers (Too soon?). Lol.

But no seriously, stick that on your refrigerator if you're into trimming it down this summer. And while you're at it, stick it on R Madhavan's fridge too. Yeesh, he's ballooning up into a Macy's Thanksgiving float. Rehnaa hai mere kitchen mein?

Stop press: Arjun's character in Ishaqzaade is called "Parma". *snicker*. Parma!!!! You know how many 'is he gonna ham it' jokes I'm holding back right now?
Posted by E-Volver at 9:27 AM

I've got the opposite to fret about. I need to bulk up! Working on it...