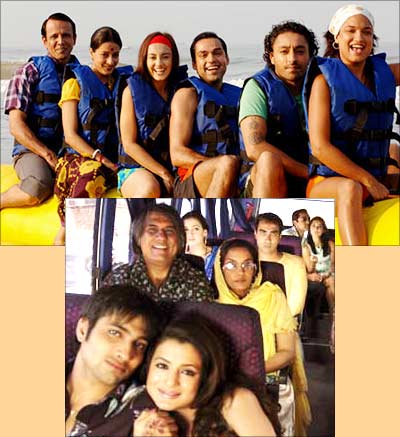 Get that song outta my head!

Yeah, its still Sajnaji vari vari from HTPL. And its worse after seeing the movie. Dozen remixes of this song, and they're all brilliant. Reminds me a lot of Dhol Vajda, 'cuz of the breakbeat.
So, a busride to Goa with a desi dozen? This movie was rather neat, more so because of the adequacy of the characters and the free-flow of the film, which seemed rather unscripted. I loved the picturization of the track, and the way Bollywood has awoken maturely to themes like homosexuality and real-life superheroes (no, they do exist, I assure you :-)). Minnisha Lamba was a pleasant surprise, Shabana was a tad bit overtly preachy, but tolerable being the legend that she is, Sandhya Mridul's face looks like a badly-kneaded caricature, and I'll have whatever the guy who dubbed for Vikram Chatwal (?) was drinking or smoking or both. Also, Ranvir's role was mercilessly short and Amisha should be mercilessly shot. But all in all, glad I took the busride, and the movie belonged to two individuals - Boman Irani and Kay Kay Menon. Performances A Pointe!
Posted by E-Volver at 11:47 AM

I thought this movie was great. I loved Shabana Azmi - she looked, sounded and acted sooo much like your typical Muslim aunty, especially the dance she breaks into in Sajnaji Vari Vari!

I guess the moral of the story is that you're only a perfect couple if you're both super heroes!! (How random and funnily portrayed was that!?)